Apologies for the delays! We had lots of visitors over the past few weeks, plus moved out of the hotel (after two months without a microwave, kitchen, or real fridge!) and into the house.

In between all of that, we took a few days and went down to Buenos Aires to work on our visa paperwork. 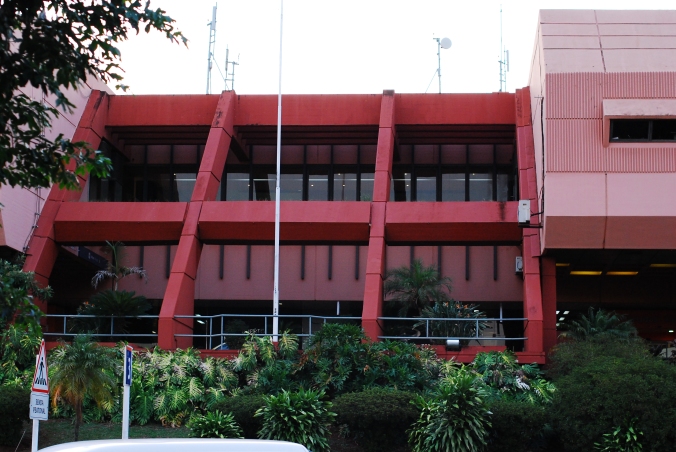 The Posadas airport is adorably small. There are maybe five check in counters, three gates, and a single restaurant/gift shop combination. It’s the type of airport where people wait for their loved ones while reaching through the gate to the tarmac. When you board, you just walk out of the terminal, take forty steps across the tarmac, and go up into the plane. Bonus–free parking!

Flying really seems to be  a luxury here. Domestic plane tickets are expensive (the 1.5 hour flight to Buenos Aires cost us around $350 USD each), so it’s not odd to see people getting their photo taken in front of the plane, people dressed up to fly, and a core group claps whenever the plane lands.   Another fun Argentinian aircraft habit? They hurry like crazy just to wait in line. The plane touches the ground, and it’s seatbelts off, grabbing stuff out of the overhead bins, and waiting in the aisle to deplane.

Immigration was a unique experience… one that we get the joy of doing once a year now.  After we finally found the building (Google Maps is not useful in South America, and apparently every street has multiple buildings with the same street address… on opposite ends of the street), the place is a bit of a madhouse. There is no logical sequence (first you do this, then you wait in line and do this), and instead just a long line curls out of the building filled to the brim with people of all nationalities trying to navigate the system.

We had a helper assigned to us by our company to help navigate this nonsense, but we still have our US phones. We were given our helper’s cell phone number, but couldn’t figure out how to get the call to go through. In Argentina, you use a different phone number depending on if you are 1) a cell phone calling another cell phone, 2) a landline calling a cell phone, 3) in a different province than the person you want to call, and 4) other random rules that we have yet to figure out.  We blessedly found an American family waiting in line, who helped us try to find some other combinations of numbers. We ultimately found our helper, hours later, after begging the surly immigration officer to call her. (As an immigration helper, she knew everyone in the immigration office. So when we gave her name, they knew exactly who we were talking about, and refused to acknowledge us. But that’s a different story on the difference in customer service expectations in Argentina.)  At that point, we were kind of out of luck for the first day’s appointment–which we’ll be making up in a different province later this week. The next day was more straightforward–we got to the immigration office at 7:15am, where a line had already started to queue. We met our wonderful helper Georgina, who walked us through the process. I am still not entirely sure what all of  the random steps were that led to us finishing hte paperwork (there was a lot of Georgina telling us “wait here” or “sign this” without quite knowing what was going on), but we ultimately ended up getting our precarias, or provisional residencies. What this means is we will get our DNIs, or national IDs, in about two months. A random post man will show up, we will hand him our receipt from our immigration day, and he will give us our DNIs. It’s a completely confusing system.

However… when we weren’t fighting our way through immigrations, we had the chance to see some of Buenos Aires. We didn’t stray too far from our hotel (Sheraton Libertador), but still got to see a lot of cool shopping, restaurants etc.

The city is absolutely bustling with people–and terrifying traffic. We walked up and down Avenida Florida, which is filled with blocks and blocks of shops. There were many malls, some more upscale than others, and one was entirely filled with little tech shops where you could buy a motherboard or headphones or a router. One of the malls was very upscale and we partook of some American food (Subway, FYI, is the same in any culture. It was also the first time I had seen turkey down here). We also found the fastest WiFi yet in that mall… so we hung out there for a bit and window-shopped all the expensive clothes.

By far and large, the most popular products on the avenida were leather goods (endless coats! endless purses!), figurines (jade or stone), and shoes. Lots of clothes, and a fair number of cell phone stores, and some other random ones. I found a make up store and picked up some essentials. (I was meaning to see what they had and try some of the South American brands–plus I left all of my nail polish in the states, and with all the sandals I’m wearing down here, wanted something pretty for my toes.) Prices for most makeup is right on par for what I’d pay for it in the States–which surprised me, since most imported goods are incredibly expensive.  Other than that, we didn’t get anything too exciting–we went to the fancy farmacia (drug store) and picked up some items we hadn’t found in Ituzaingo or Posadas yet.

The other big win in our trip? We found a restaurant called California Burrito Company, started by a few expat Americans who clearly also missed Chipotle. No guacamole, but some pretty good burritos! Now we know where to get our fix if all else fails. 🙂